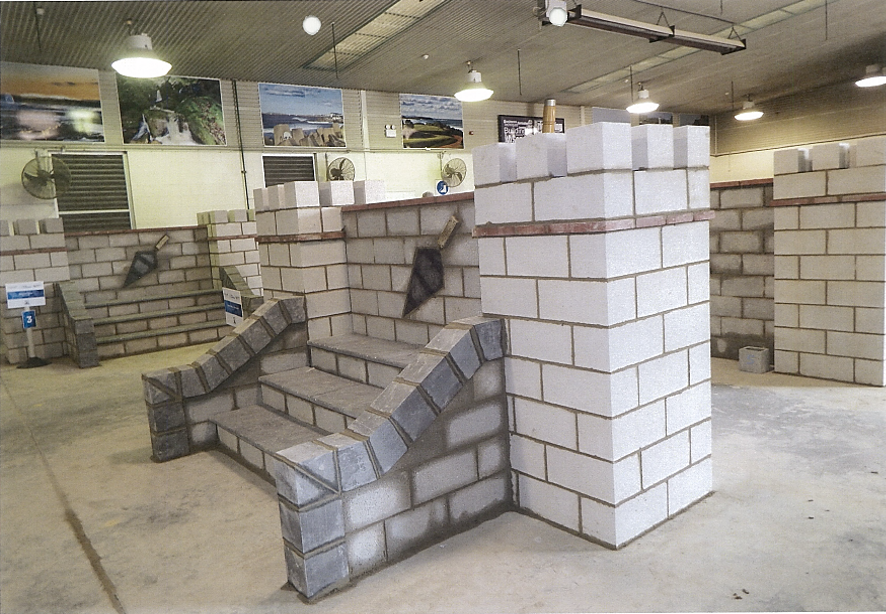 The Golden Trowel Competition is organised by the Concrete Masonry Association of Australia and recognises highly skilled bricklaying apprentices.

The biennial completion attracts the best apprentices from around the country, with teams competing over two days for the coveted Golden Trowel.

In October 2015 the event was held for the twelfth time and Quality Training in Construction was proud to have a team of talented students travel to Wollongong to compete. Third year student Daniel Sheehan and just second year Anthony Fabbo were chosen to take part. They were guided by teacher Lynne Sheffield.

The teams worked over two days to complete a project which had four main design features:

QTIC team leader Lynne Sheffield was allowed to help with the setting out the project and the marking of cuts, but was not permitted to lay, touch up, cut, or assist with any of the finishing’s.

The team was allocated a brick saw for half an hour period between 10.30am – 12 noon.  All cuts had to be cut between that half hour periods.

All competitors met for the first time at dinner on the eve of the competition. All competitors were given the set of plans and specifications. The evening was spent in a room going over, these plans. It is important for the team to work out the best method of setting the project out and the plan of attack to complete the project.  The team make notes, draw up sections of the plan and worked out the various cuts which needed to be cut during the half our saw time.  This preparation time is a must for the team to be successful over the two days.

Daniel and Anthony showed true skill with the setting out of the project. The specifications stated that to start you had a starting point which was marked on the concrete on the left front corner of the left pier. Here the boys used their set squares, tapes, chalks to set the rest of the job out. From there all work was done with the use of a spirit level, where the work was levelled, plumbed and exact gauge was determined.

The Challenging part of the project was actually the steps and the wing walling.  Daniel and Anthony worked well together to complete the project within the allocated time allowed.  One and a half days of building time.

All of the entrants worked hard and did a superb job to complete their projects. The team from Coffs Harbour TAFE took out the award for their outstanding workmanship, which was celebrated at a presentation dinner after the competition concluded.